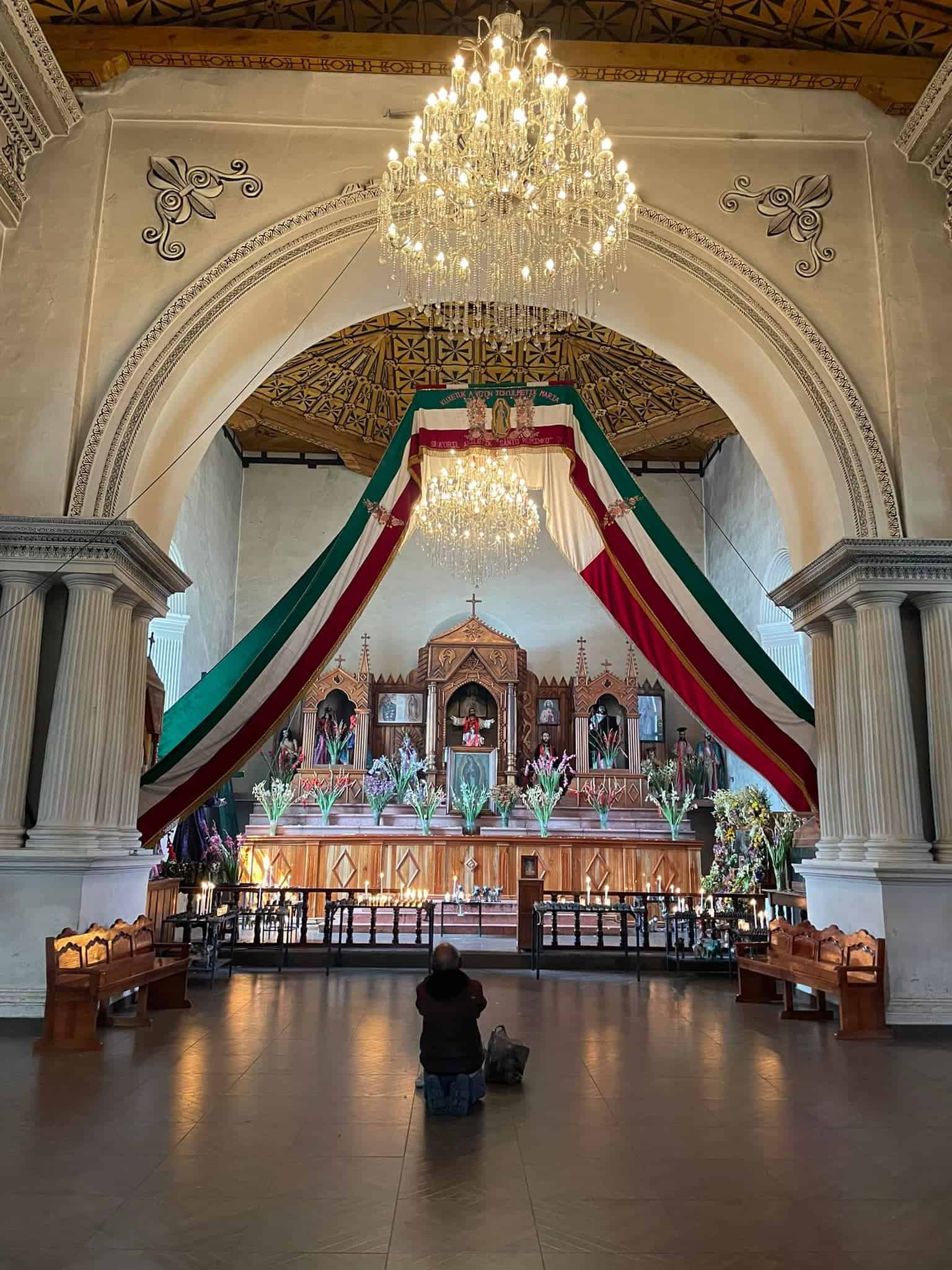 Zinacantán Mexico is a little town in the southern part of the central Chiapas highlands. While globally, few people have heard of Zinacantán, the town is a popular day trip destination from San Cristobal de las Casas.

There are 68 different indigenous groups living in Mexico, each of which speaks a native language of their own. Zinacantán is home to the Tzotzil people.

The original name of this town was not Zinacantán, but Tzinacantlān. The word is of Nahuatl origin and means “land of bats”.

However, the name was modified following the Spanish colonization of Mexico since the Spanish Conquistadors were unable to pronounce the town’s original name! There is a small network of caves just outside of Zinacantán that is home to these nocturnal winged creatures – the main reason behind the town being named “the land of the bats”.

There is no significant bat population here, nor are there any legends stemming from this area that involve bats. That is simply the translation of Tzinacantlān/Zinacantán.

Today, Zinacantán is home to 45,373 inhabitants. It is part of an autonomous region of Chiapas managed by the indigenous people who wanted to exert control over their own land and territory.

To enter the region, tourists must pay an admission fee of 15 pesos (80 cents) per person. Officially, legislation states that Mexicans are exempt from having to pay this fee, however sometimes it is requested by officials. So, it is better to be safe than sorry and to simply pay the fee.

The best way to visit Zinacantán Mexico is to do so on a day trip from San Cristobal de las Casas. You can opt to do so independently or participate in a guided tour. The latter of which often pairs a trip to Zinacantán with the nearby village of San Juan Chamula.

Half a day here is sufficient. Zinacantán is famous for its textiles and its flowers. The main draws of visiting are the beautiful churches and the indigenous women’s textile cooperative.

The Iglesia de San Lorenzo (Av. Cristóbal Colón 4) is one of a small handful of churches in Zinacantán. Each neighborhood in the town has its own place of worship.

Until recently, photographing the interior of the church was prohibited. However, it is now permitted, obviously provided that you are respectful of people in prayer.

The interior of the church is stunning and likely, unlike anything you have seen before. Prior to the Spanish colonization, the indigenous people of Zinacantán had their own set of religious beliefs.

However, with the arrival of the Spanish came two options: Convert to Catholicism or be killed. Arguably, it was an obvious choice to make. However, the people of Zinacantán still retained some aspects of their own practices.

Today, the Iglesia de San Lorenzo and other Zinacantán churches boast a fascinating mix of Catholic and indigenous practices. For instance, since the native people used to pray in the mountains, the interior of the church today is filled with moss scattered all over the floor to resemble the mountains.

Many beautiful flowers are grown in this region. Whatever day, week, or month you happen to stop by, you will find them draped over the religious icons, pews, and figures within the church.

During religious celebrations such as the Day of the Holy Cross (May 3rd, annually), you cannot even see the walls or the ceilings past all of the flowers. If you are lucky, you may see local prayer-goers praying and chanting in their indigenous languages.

Look out for small colorful, hand-painted sculptures of animals. They represent animal protectors and the Tzotzil believes that all of us have an animal spirit guide with us in life.

Almost directly adjacent to the Iglesia de San Lorenzo, you will find the Capilla El Señor de Esquipulas. This little chapel is dedicated to a depiction of Jesus Christ that originated in the namesake town of Esquipulas in neighboring Guatemala.

The Chiapas region shares many religious and cultural similarities with Guatemala, owing to the proximity to this country. In some ways, some aspects of the culture are more comparable to what you will find in Guatemala than in other parts of Mexico.

Entrance to the church is free but it is recommended that you provide a small donation. 10-20 pesos or so will do. You will likely be approached with a donation box by one of the elderly town residents when you step inside.

Just out front, you will see a large sign displaying “Zinacantán” in giant, colorful letters. Obviously, getting a photo here is a must in every Mexican town/city that they exist in.

No stop to Zinacantán is complete without a stop at the indigenous women’s textile cooperative. When you pass by, the Tzotzil women will happily show you the way in which they make their handmade garments and home interior fabrics.

They often do so using methods that have been passed down through generations. In the 1980s, a German couple moved to the mountains of Chiapas, armed with a sewing machine and taught the women how to embroider.

That has since had a significant impact on the design of the local clothing and you will note that many women in this area wear garments featuring embroidered flowers, animals, and peacocks. The people of Zinacantán do not wear this traditional dress to please the tourists – this is their daily attire.

The men wear pok’u’ul, a kind of zarape made on a loom. Historically, this was white.

However, today, they sport pok’u’ul in shades of red, blue, green, or purple. The women wear a huipil blouse paired with dark loom skirts with subtle details.

These skirts are often made of wool since it does get cold in the Chiapas highlands in the evenings and during the winter months. You will note that most women wear the same colored clothes, based on whatever color is “in trend”. For the last few years, this has been purple.

The women do not speak English and so, if you cannot speak Spanish, it is helpful to go with a guide so that you can better communicate. Of course, their aim is that you purchase something from the store. However, if you are just looking for a lesson and some information, you can tip them for their time.

A Little History of the Zinacantán Women’s Cooperative

To understand the importance of the Zinacantán Women’s Cooperative, it is important to have a little background knowledge about the Chiapas region of Mexico. This is the poorest state in Mexico, with a phenomenal 76.4% of the population living in poverty.

Additionally, almost a third of the population lives in extreme poverty. Chiapas also has a very high rate of illiteracy.

Many indigenous people in the area are illiterate and cannot speak Spanish. The average Tzotzil person will spend just 4.5 years in education.

For the residents of Zinacantán Chiapas, the opening of the women’s textile cooperative was a beaming ray of hope with the potential to change the realities of many of the younger generations living in the area. More than 60 women work in the cooperative and they donate a percentage of their salary every month to a school created to give Zinacantán children a better future.

Prior to its introduction, many of the women here earned just 6 pesos (33 cents) an hour. Following its establishment, many make 15 pesos (82 cents) per hour.

So, if you stop by, consider purchasing a table runner, a bed runner, a small bag, or an embroidered bag. They make nice Mexico souvenirs and your purchase can make a significant difference in improving the lives of these women and the wider Zinacantán community.

There are a few simple cafes and eateries scattered around Zinacantán. They mostly cater to local people and are very affordable.

There are also a handful of hotels here if you wanted to stretch out your visit a little longer and stay overnight. Cafe de Olla is one of the most beloved Mexican drinks.

The name Cafe de olla literally means “coffee in a clay pot” owing to how the drink is traditionally prepared. It is prepared spiced with cinnamon and raw dark sugar known as Piloncillo.

You can buy a cup of steaming hot cafe de olla for just a few pesos here. Better yet, it is prepared with fresh, ground Chiapas coffee beans from the plantations in nearby Ocosingo.

Getting to Zinacantán Mexico

You have a couple of options available for getting to Zinacantán from nearby San Cristobal de las Casas. The town is just 11km away and can be reached in less than 20 minutes.

If you prefer to visit independently and have a more flexible schedule, you can travel to Zinacantán by bus or colectivo. Alternatively, there are many local tour companies that offer affordable day trips to the region.

Opting to visit Zinacantán on a tour aids in obtaining more context to the things that you see. It also takes a lot of the stress out of trying to figure out the logistics to get between San Cristobal, Zinacantán, and Chamula.

A lot of time can be wasted waiting around for colectivos and trying to locate the correct pickup points. Better yet, when you explore with a local guide, you have a local “expert” on hand to provide you with recommendations on the best things to see, do and eat in Chiapas.

You can opt to take a colectivo (shared minivan taxi) or a private taxi from San Cristobal de las Casas to Zinacantán. Your hotel can likely assist in organizing a cab to the town or you can take one from the main square.

You should expect to pay around 100 pesos for a taxi. With the assistance of your hotel/Airbnb host, you may also be able to organize something of a “tour” with a local cab driver where they take you to both Zinacantán and Chamula and wait for you for a set period of time.

From the central square in San Cristobal, you can also take a colectivo. These are small white vans that cost just 22 pesos per person.

Colectivos run frequently and depart when full. It is easy to distinguish which one you need as they will have a sign saying “ZINACANTAN” in bold capital letters displayed in the front window.

Have you visited Zinacantán or other indigenous settlements in Chiapas or wider Mexico? What did you think?