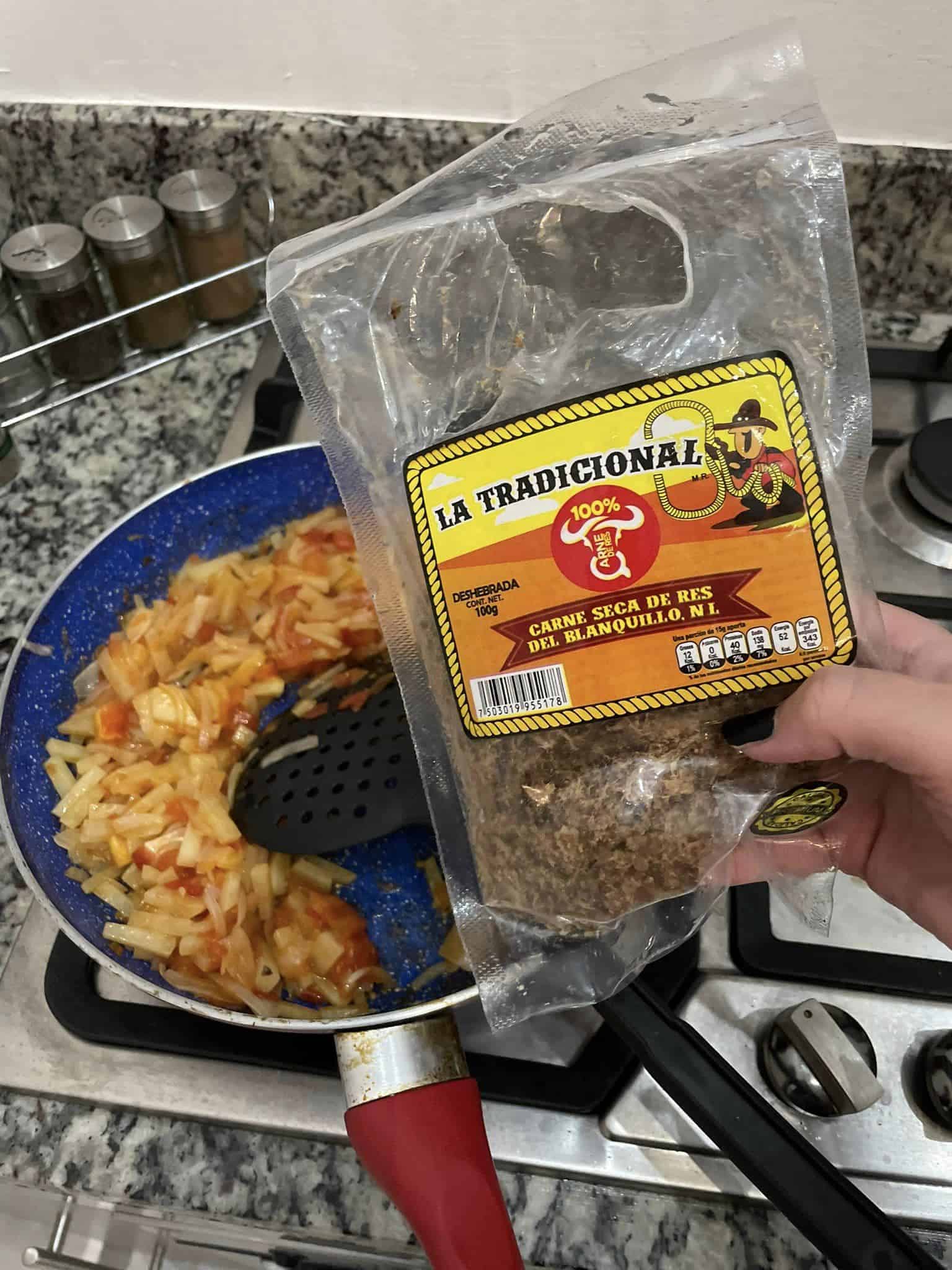 Curious to know what is machaca? This dried meat treat that originates from Northern Mexico is often referred to as the Mexican version of beef jerky.

However, that isn’t really an accurate comparison as the texture, preparation, and method of enjoying and eating machaca is something entirely different from that of beef jerky. But chances are if you are a meat lover and a foodie, you will enjoy the different ways of preparing machaca meat.

If you are planning on traveling to Mexico, machaca also makes a great souvenir or foodie gift from your trip. (Just check your country’s travel advice to make sure that you are allowed to bring dried meat in your suitcase).

Machaca is dried meat that is typically prepared with pork or beef. You will find it in delicatessens, specialty food stores, and butchers around Mexico, although it is more prevalent in the northern states.

It is believed to have been invented in the little pueblo of Ciénega de Flores in Nuevo Leon. At that time, dehydrating meat was a good way of preserving it before refrigeration was invented.

Obviously, times have changed, but machaca remains an important part of the regional food culture and it is still prepared using the same traditional methods. Although back then, machaca was often prepared with venison, beef tenderloin is the preferred meat of choice these days.

Machaca and many of the dishes created from it are associated with rancheros, vaqueros (Mexican cowboys), and people living in rural areas. You will see it frequently in the states of Sonora, Sinaloa, Nuevo Leon, Monterrey, and Chihuahua.

However, even in random states and cities in other parts of Mexico (e.g. the city of Merida in the Yucatan), you will find places that sell or serve the specialty. You may also find that you can order machaca online or in specialty stores in the United States, particularly in the south, close to the US-Mexico border.

When a cut of meat is selected for preparing machaca, it is rubbed and seasoned with salt, before being left out in the sun to dry. The name ¨machaca¨ stems from the process of beating the meat.

This is often done on a block of wood with a stone hammer, although stones are also often used. Some people prepare their own machaca at home, but you can also buy it in stores.

Machaca is typically rehydrated with water and cooked in oil before it is eaten. However, you can also simply take a handful of it out of the bag and eat it as it is too.

A popular way to prepare machaca is to cook it to make tacos. In order to do so, you can heat some oil in a skillet over medium heat and then add onions and tomatoes.

Garlic or any desired herbs can also be added to the mixture for extra flavor. Once the machaca, onion, and tomato mix is ready, simply scoop it up and add it to a warm corn or flour tortilla.

Then, roll it up and make a taco! Top with any hot sauce or salsa of your choosing.

You can also enjoy machaca in accompaniment to Mexican breakfast dishes. As far as most Mexians are concerned, breakfast is one of the most important meals of the day.

People usually start their mornings off with a strong cup of coffee, some fresh juice, a large egg dish, and a platter of fresh fruit or a pan dulce (sweet bread) on the side. To prepare machaca con huevos, simply scramble a couple of eggs along with machaca, some tomatoes, onion, chili, serrano pepper, and other vegetables as you like.

Serve it with fresh tortillas, refried beans, and perhaps some salsa Valentina or a chunk of soft panela cheese. This dish is said to have been invented in the 1920s by a woman named Fidencia Quiroga, who was known locally as “Tía Lencha” (Aunt Lencha).

Since people were bored of eating machaca by itself, she decided to spice things up by adding tomatoes, spices, and vegetables to the mix. This took locals by storm. You will often find it on the breakfast menus in cafes in Northern Mexico today.

What is Machaca? FAQs

Do you still have any burning questions or concerns about what is machaca? Are you somewhat wary about the concept of cooking with rehydrated meat? Hopefully, you will find all the answers that you are searching for below!

What part of Mexico is machaca from?

Machaca is originally from Ciénega de Flores in Nuevo Leon. However today, it is made and enjoyed throughout Northern Mexico, and you will find it in other parts of the country too.

No. Machaca is typically prepared with beef. Sometimes, it is also made with pork, and historically, it was prepared with venison.

What part of the cow is machaca?

Machaca can be prepared using meat from various different parts of the cow. Top sirloin, brisket, or chuck roast are all popular choices.

It is important to note that the quality of the meat used to prepare machaca is still very good quality. It is not the case that a substandard cut of beef or the ¨offcuts¨ are used just because the delicacy is dried and shredded.

Can you eat machaca dry?

Yes. You can eat machaca dry as a light, beefy snack in a similar way to which you would enjoy beef jerky.

Is machaca from Sinaloa?

Machaca was first invented in Nuevo Leon. However, it is often made and enjoyed across the state of Sinaloa, too.

Does machaca need to be refrigerated?

When you buy bags of machaca, they are usually sold in sealed, airtight bags that have a very long shelf life. These can be kept in a cool dry place in your kitchen or pantry. However, once you have rehydrated and cooked something with machaca, any leftovers of the dish that you have made that you want to save needs to be stored in the fridge, ideally in a covered bowl or airtight container.

Have you ever tried machaca? What are your thoughts?

What types of Mexican foods and snacks do you enjoy in general? If you are interested in Mexican gastronomy, life, and culture, you may also enjoy reading these facts about Mexico or this post on Mexican superstitions.