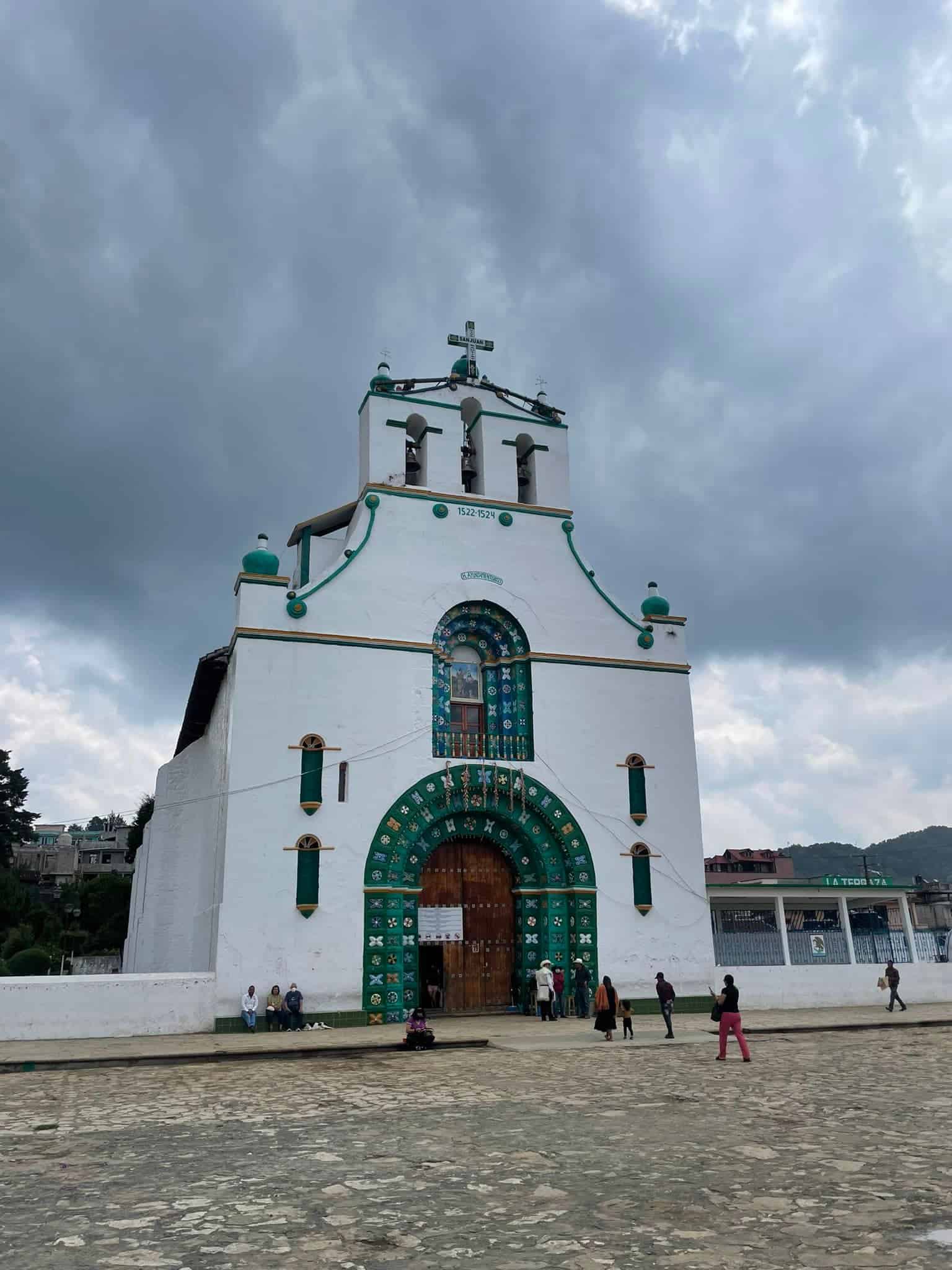 San Juan Chamula is a small town just 11km (25 minutes) away from the charming Chiapas pueblo magico of San Cristobal de las Casas. It is a settlement like no other, with a culture that is deeply entwined with ancient spiritual practices and religion.

The raison d’être for most people to visit Chamula is to step inside the Iglesia de San Juan Chamula. From the outside, this beautiful church looks no different from your standard Mexican Catholic church.

It boasts a crisp white facade with green details and colorful, intricate azulejos. But the inside of the church bears witness to ceremonies and rituals that cannot be observed in any other church anywhere else in the world.

The church is essentially used as a place of healing. Most people come here in order to pray for themselves and their family members to be relieved of any sickness or ailments.

The interiors of the 16th-century San Juan Chamula church are far larger than you would realize by observing the church from the outside. On any given day, as you step inside, you will be greeted by dozens of prayer-goers.

The walls are lined with statues of various Catholic saints. People will often pray to the saint of their choosing – perhaps due to an affection for a particular saint or a past positive experience as a result of praying to them.

A lot of people in Chamula either do not trust traditional medicinal practices or cannot afford them. So, they look to religion instead.

The Tzotzil people believe that when you get sick, it is because your soul goes away for a while. They believe that you will get ill if someone is envious of you and projects their negative energy onto you.

One way that they can expel this negative energy and any evil within? By burping.

As you walk around the church, you will see Tzotzil people drinking an abundance of Coca-Cola and other fizzy drinks so that they can then burp and expel any evil. Another popular beverage consumed in the church is Pox (pronounced posh).

This alcoholic Mexico drink has a smoky flavor and an alcohol content that is often as high as 50%! The ancient Mayans believed that the burning sensation that they felt in their throats when swallowing the beverage was evil leaving their body.

When a sick Tzotzil person prays at the San Juan Chamula church, they are usually joined by their entire extended family. Sometimes, they are also accompanied by a healer or curandero.

One of the more extreme practices that you may bear witness to here is that of animal sacrifice. A spiritual healer will perform a small ritual that transfers the sickness and evil from within the sick person into a chicken.

The chicken is then sacrificed. Its neck is snapped in exchange for making the sick person better.

There are no pews or seats within Iglesia San Juan Chamula unlike in other churches. Instead, people sit directly on the floor.

They light their candles on the floor and wait with them until they have burned out. Those working at the church will usually do the rounds of the premises, scraping the melted colorful wax off the tiles.

The floors are laden with moss and pine needles. This is because centuries ago, the indigenous people of Chiapas would pray in the mountains.

Today, the interior of the church is designed to look like the mountains so that people feel as though they are still at one with nature. Indeed, as you walk through Chamula, you will usually see local people transporting giant bags of pine needles to the church on the back of their motorbikes.

Things to Note Before Visiting the Iglesia San Juan Chaumla

There is an admission fee of 30 pesos for visiting the Iglesia San Juan Chamula. This is payable at the little kiosk upon entry.

You are not permitted to take photos inside the San Juan Chamula Church and this is very understandable. After all, people are performing deeply personal spiritual rituals inside.

Tourists that have attempted to take photos have had their cell phones and cameras violently snatched and destroyed in the past. In addition, photography inside the church is accompanied by a $250 USD fine and potential jail time. In short, it simply is not worth offending the locals over.

There is no specific dress code for entering the church. Mexican Catholicism, particularly in Chiapas, is often very different from that which you will witness elsewhere.

Covering up and dressing a certain way is not a prerequisite for entering. The only thing that you should do is to try and be respectful of the people in the church, respect their personal space, and not stare at them performing their rituals to a degree that makes them uncomfortable.

Other Religious Practices to Observe in Chamula

Why? As part of a religious ritual.

Chamula locals believe that before they can start praying, they need to scare away any evil or ill-intentioned spirits. They do so with the loud “bangs” emitted from firecrackers.

Centuries ago, before the invention of gunpowder, people used to throw rocks in order to scare away evil spirits. Along the streets and promenades that take you towards the Iglesia de San Juan Chamula, you will note an abundance of stores selling fireworks and incense to use in these cleansing rituals.

Getting to San Juan Chamula

You have a couple of options available for getting to San Juan Chamula from nearby San Cristobal de las Casas.

If you prefer to visit independently and have a more flexible schedule, you can travel by colectivo. Alternatively, there are many local tour companies that offer affordable day trips to the region.

A popular option is to pair a trip to San Juan Chamula with the nearby indigenous town of Zinacantán. The two settlements are small, so half a day in each is ample time to explore.

Visiting San Juan Chamula on an organized tour is a good idea. It is very useful to have a local guide on hand to explain the mysterious spiritual practices that you are bearing witness to.

Better yet, opting to visit the town on a tour takes a lot of the stress out of the logistics of getting from A to B and waiting around for colectivos. A selection of reputable options is detailed below for your consideration.

You can opt to take a colectivo (shared minivan taxi) or a private taxi from San Cristobal de las Casas to San Juan Chamula. Your hotel can likely assist in organizing a cab to the town or you can take one from the main square.

San Cristobal cab drivers are usually pretty straight. However, taxi drivers the world over are often a law unto themselves and it isn’t exactly uncommon for them to try and charge you more if they think you are a tourist that doesn’t know the going rates.

You should expect to pay around 120 pesos for a taxi to Chamula. Agree on a rate with your cab driver before setting off.

With the assistance of your hotel/Airbnb host, you may also be able to organize something of a “tour” with a local cab driver where they take you to both Chamula and nearby Zinacantán and wait for you for a set period of time.

From the central square in San Cristobal, you can also take a colectivo. These are small white vans that cost just 22 pesos per person.

Colectivos run frequently and depart when full. It is easy to distinguish which one you need as they will have a sign saying “CHAMULA” in bold capital letters displayed in the front window. Your hotel receptionist/concierge can point you in the right direction.

You may have to wait a while for your return colectivo. However, there are plenty of cafes in Chamula where you can sit and wait with a steaming cup of freshly brewed Chiapas coffee.

Have you visited San Juan Chamula or other indigenous settlements in Chiapas or wider Mexico? What did you think?