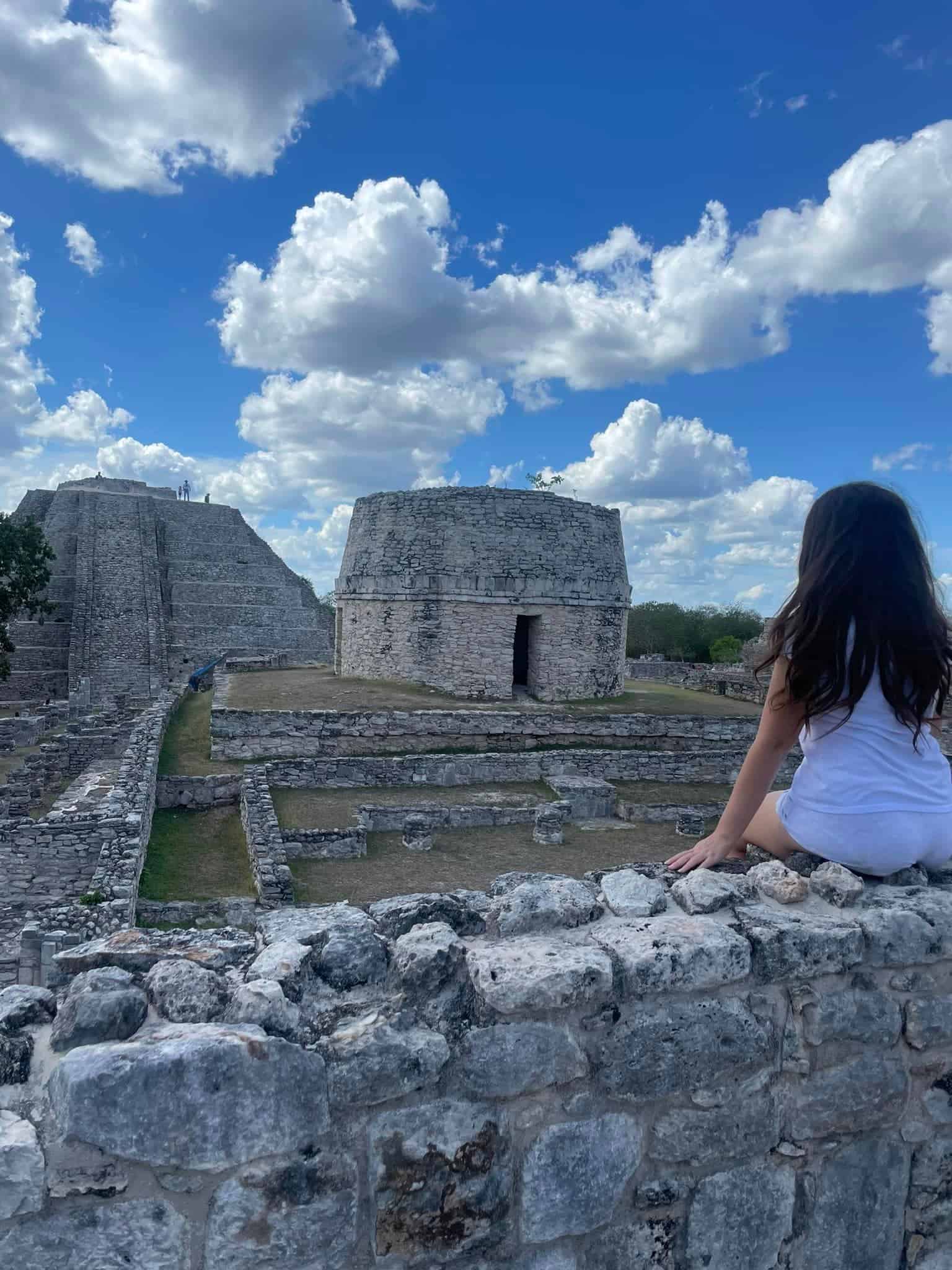 The Mayapan Ruins are arguably one of the most important Mayan ruins that you can visit in the Yucatan and in fact, all of Mexico.

That being said, they are frequently overlooked, and a lot of travelers to Mexico are not aware of their existence at all. Mayapan is particularly important because this site is considered as being the last great Mayan city.

Mayapan became of significant importance after the downfall of Chichen Itza and its rise to power essentially marked the beginning of the end for their civilization. It is both worthwhile and interesting to visit the Mayapan ruins.

Doing so enables you to obtain a bigger picture of how all of the various Mayan ruins and archaeological sites fit together to tell a story. You can incorporate the Mayapan ruins into your Yucatan itinerary alongside the important sites of Chichen Itza, Uxmal, Ek Balam, Coba, and Edzna.

The Mayapan ruins are located just a few miles south of the town of Telchaquillo. They are about 40km south of Mérida and 100km west of Chichen Itza, respectively.

The site dates back to around 1000 A.D. However there is some debate among archaeologists and historians around the actual date that the city was founded.

It is estimated that approximately 12,000 people lived within the city’s defensive walls, with a further 5000 or so living in the rural areas just outside it. The site is small – spreading over an area of just 2.5 square miles.

If you visit today, you can easily explore the center of the ruins in just under an hour, taking time to climb the pyramids and admire the various structures, carvings, and temples. The Mayapan ruins are still being excavated and worked upon.

A team of Mexican and American archaeologists continues to work around the clock to continue uncovering the ruins here. Who knows what else awaits beneath the surface?

History of the Mayapan Ruins

It is believed that when the city of Mayapan began, it did so under an alliance with Chichen Itza and Uxmal. It was an important administrative and financial hub until it ultimately became the Mayan capital.

Following the downfall of Chichen Itza, King Kukulkan II of Chichen Itza and his people moved to Mayapan. He ruled over the city between 1263 and 1283 AD.

Two major cultural groups occupied the city at that time: the Xiu and the Cocom. Kukulkan was perhaps the glue that held the peace together in this region.

After he passed away, feuds broke out between the Xiu and the Cocom. The latter would go on to conquer the northern Yucatan and seize control of Mayapan.

Their success was not to last though. The Xiu plotted their revenge and in 1441, they revolted against the Cocom, killed all members of the Cocom in Mayapan, and seized control of the city.

Eventually, the Xiu abandoned the city. Historians debate about the date when Mayapan was abandoned as they do with the date that the city was founded. However, records indicate that it was some time in the 15th century – perhaps not too long after the Xiu defeated the Cocom.

It is estimated that there are 4000 structures here, although not all of them have been excavated. There are several sunbleached remnants of old residences and temples.

The piece de resistance of the Mayapan ruins though is the Pyramid of Kukulcan. The pyramid was built as a replica of the main pyramid in Chichen Itza and its resemblance is uncanny.

The only difference perhaps being that Mayapan’s Pyramid of Kukulcan was less well built. Archeologists believe it to be an inferior copy. Indeed, the same care and effort were not put into the constructions at Mayapan as at Chichen Itza, Uxmal, and other Mayan cities.

There are several cenotes in and around the Mayapan site. You will note that there is a relatively large one contained within a cave right at the foot of the Kukulcan pyramid.

Unfortunately, they are currently all closed and inaccessible. This is perhaps due to the excavation work in the area.

Admission to the Mayapan Ruins

Admission to the Mayapan ruins is 65 pesos ($3) for foreign visitors. Entrance is free for Mexicans, provided that they show their ID. This is quite a substantial difference to the cost of entering Chichen Itza (533 pesos) and Uxmal (495 pesos)!

It is not easy to access the Mayapan ruins without your own transport. The best way to reach the site is by driving if you are renting a car in Mexico.

Organize a taxi to Mayapan

If you cannot drive or you prefer not to, you may also be able to organize a tour with a local taxi firm from Merida. You can pay for the taxi to take you, wait while you explore the site, and then return to Merida.

Uber and Didi are the most common taxi apps used in Mexico. You may be able to organize a one-way journey to Mayapan and then organize a price with the driver for them to wait for you.

Separately, you could request for your hotel to help you to organize a ride with a local taxi firm. Having your hotel/accommodation organize this for you helps to ensure that you do not get ripped off.

If you are driving, if you are not too overwhelmed with seeing several Mayan ruins in a day, you could consider driving from Merida to the Mayapan ruins, from Mayapan to the town of Muna for lunch, and from Muna to Uxmal. Then, spend your day exploring the Uxmal site before heading back to Merida for the evening.

The bus company Lineas Unidas del Sur services the route from Merida to Mayapan. Buses run between the Yucatan capital and the ruins every four hours.

The bus terminates at Telchaquillo so it is important to note that TELCHAQUILLO will be written on the display at the front, not Mayapan. Confusingly, there are two different sites: the village of Mayapan, and the Mayapan ruins.

The two are not actually close to each other. Make it clear to the driver that you need to get off at the ruins.

You will probably see other tourists on board headed to the same place so generally speaking, the driver will know to stop there. When you board, tell the driver you want to go to  “Ruinas de Mayapán” or “zona archeologica de Mayapán”.

It is worth having an offline map such as Maps Me downloaded on your phone. That way, when you are on board the bus, you can track your journey and know when you need to press the button to get off.

There are multiple bus stations in Merida. The one you need is the Noreste bus terminal, located at Calle 67 and Calle 50.

Technically speaking, the drive to the Mayapan ruins should take 45 minutes. However, the bus makes several stops en route – both on the outskirts of Merida, and in the villages of Acanceh and Tecoh.

So, you are looking at a journey time of closer to an hour and 45 minutes. You can purchase your tickets from the ticket office at the station, or directly from the driver on board. Be sure to double-check what time the return bus will be.

You only really need an hour or so to explore the Mayapan ruins. So when you’re done exploring,  it can feel that you traveled a long way for something that took a very small amount of time.

A local couple operates a small stall at the site entrance. They sell homemade snacks, fresh coconut water, and great handmade souvenirs for a low cost.

It is worth packing plenty of water and snacks though. It is very hot here and if the store should happen to be closed, there are no other shops nearby.

Grutas Tzabnah and the 13 cenotes

Nearby, if you have a car, you can consider traveling to Grutas Tzabnah just outside Tecoh. This cave complex contains 13 cenotes and it is possible to take a tour through them with a local guide.

This is as off the beaten path as you can get in the Yucatan. Even venturing here on a weekend, you are likely to have the place practically to yourself.

It is important to note that there is some element of a physical challenge involved in visiting  Grutas Tzabnah and this is not for the claustrophobic. You will be given a helmet, knee pads, and a head torch and you have to crawl through tunnels, swim, and climb up rope ladders to get from one cenote to another.

Another option is to take a tour of Hacienda Sotuta de Peon. The hacienda is one of many gorgeous properties like this situated in and around Merida.

The hacienda was built in the mid-nineteenth century. Today, it has been lovingly restored to its former glory and it is possible to take a guided tour around the property. You can also opt to stay here if you are looking for a luxury stay in the area.

Pixya is a small village some 5km away from Tecoh. It is home to Cenote Noh Mozon.

This is an offbeat, lesser-known cenote that can be reached by venturing down a dirt trail.

Do you have any additional questions about visiting the Mayapan ruins or planning a trip to Mexico in general?  Feel free to reach out via the comments below. This is one of the must-see sites of the Yucatan and it is absolutely deserved of your time.