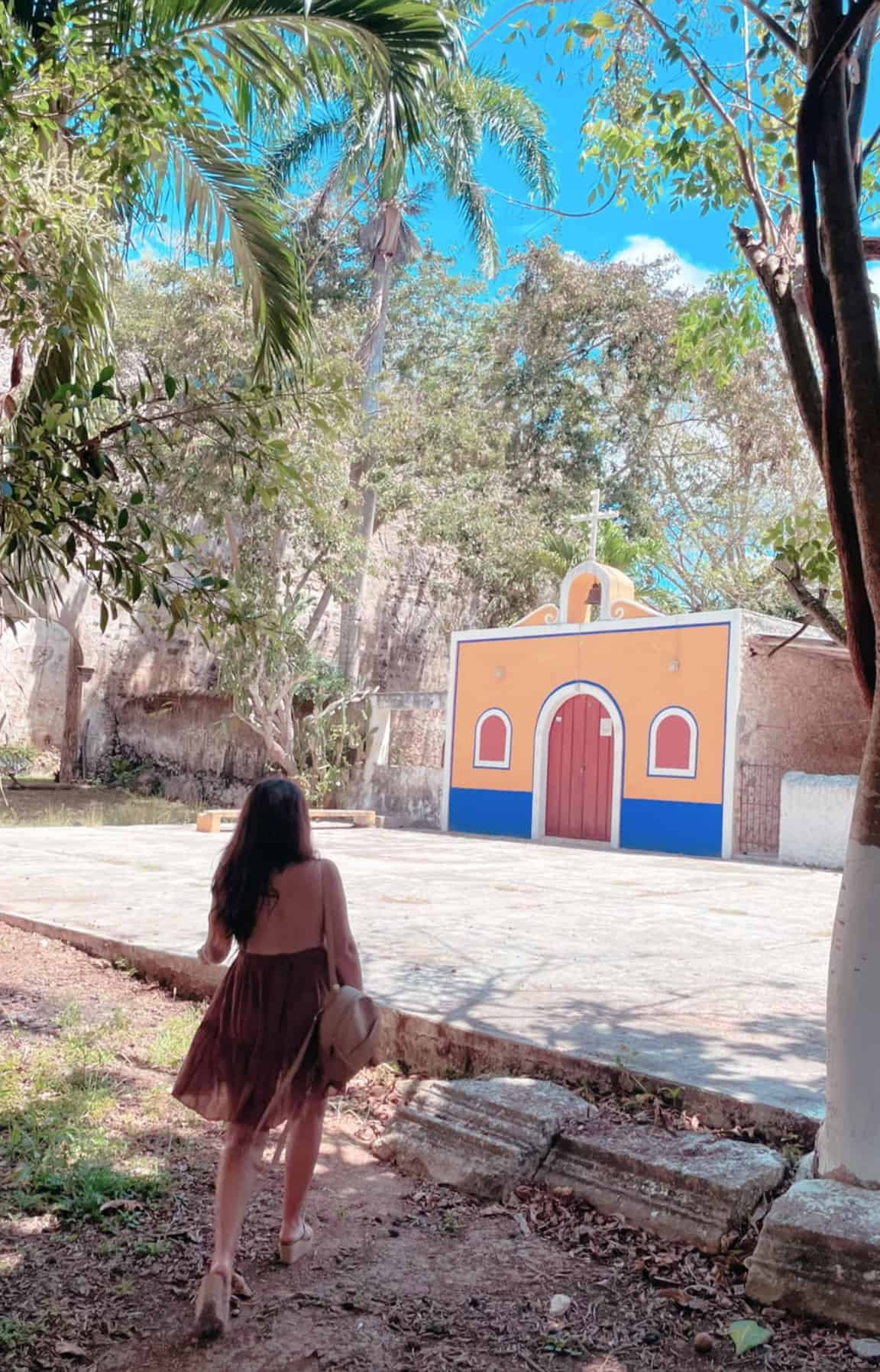 Kikil Yucatan is a quaint little village in the eastern part of the state, just 6km north of the city of Tizimin. It isn’t a tourist place in itself, but you are likely to pass by the area en route to the beach town of El Cuyo, Las Coloradas, Rio Lagartos, or other parts of the northeastern Yucatan.

It is well worth stopping by for an hour or two. This charming little settlement captures the hearts of all those that visit and provides an authentic glimpse into what traditional life in the Yucatan is like.

The name of the town is said to come from the Mayan word “Kik” meaning “rubber plant”. “Kikil” then, means “of the rubber.”

Kikil is a nice place to stop on a wider Yucatan road trip. The village is centered around an old, abandoned convent (Ex-Convento Franciscano de Kikil) and the sunbleached remnants of a former hacienda.

There is almost always a local man standing in the center of the square beside a docile bull that he has saddled up. For a couple of pesos, he allows people to take photos beside the bull or to climb aboard the saddle and have selfies at the top. The safety and ethics of this are debatable but Mexican children seem to love it and at weekends, you will see queues of people waiting in line for a turn on the bull!

The Ex-Convento Franciscano de Kikil is worth exploring. From the outside, it is clear that this was once a grand building that was inhabited by nuns.

Sadly, it has fallen into disrepair since its abandonment and until a recent clean-up initiative, it was hazardous and overgrown. Today, you can explore the site. There is usually a man out front collecting 20 pesos per person for entry, though this doesn’t seem to be an official entry fee, rather, the locals seizing the opportunity to monetize tourism (and understandably so).

There is a very limited amount of information about the convent online and no information inside. A small museum inside contains large stone bells and a number of religious objects recovered from the area.

Beside the convent, you will see a gorgeous colorful little catholic church dedicated to San Francisco. Its doors are usually locked, but in the past, locals have hosted religious ceremonies and processions here.

There are only four restaurant options in Kikil. The restaurant in front of Cenote Kikil serves traditional Yucatecan fare. It’s basic, but can be a convenient choice if you are visiting the cenote.

The very best place to eat? The tented restaurant of Ana Carla Kikil Barbacoa, is right opposite the abandoned convent.

This eatery specialises in birria – a slow-cooked Mexican soup dish that originates from Guadalajara and the state of Jalisco. Birria is usually prepared using sheep or goat meat but here, they make the dish with beef.

It is not common to find birria in the Yucatan. You mostly find it in the northern part of Mexico but many people from Kikil and the surrounding areas are ranchers.

To create the dish, the meat is marinated with guajillo, ancho, and chipotle peppers, as well as a blend of spices including garlic, cumin, cloves, thyme, oregano, and marjoram. It is then slow-cooked until tender and juicy.

When served, you will be given a portion of onions and cilantro to sprinkle on the dish, as well as a range of hot sauces and limes for squeezing. Wash it all down with an ice-cold horchata.

Kikil Yucatan is perhaps best known for its cenote Kikil. This is a gorgeous open cenote with clear, turquoise waters that are framed by lush, tropical foliage.

There are more than 7,000 cenotes in the Yucatan. While people don’t travel to Kikil specifically for its cenote, it is arguably one of the best ones in the state. It would certainly give some of the better-known Homun cenotes a run for their money.

The village’s remote location and the fact that few people are aware of the off-the-beaten-path settlement of Kikil means that the cenote is never crowded. As long as you avoid Sundays, when locals have the day off work and come for a refreshing swim, you will probably find that you have it all to yourself. That is, bar the occasional iguana or motmot that lives in the nearby trees.

Entrance to the cenote is 40 pesos ($2) for Mexican nationals and 100 pesos ($5) for foreign visitors. Life jackets are mandatory in the water and can be rented for free.

Have you stopped by Kikil Yucatan during your time in Southern Mexico? Are you planning to?

This is one of the best places to visit in the Yucatan, particularly if you are already headed to El Cuyo or Rio Lagartos. It makes a very worthy addition to any Yucatan road trip.

If you are visiting the Yucatan for the first time, you may also enjoy reading this article on the best time to visit the Yucatan or this post on safety in the Yucatan.