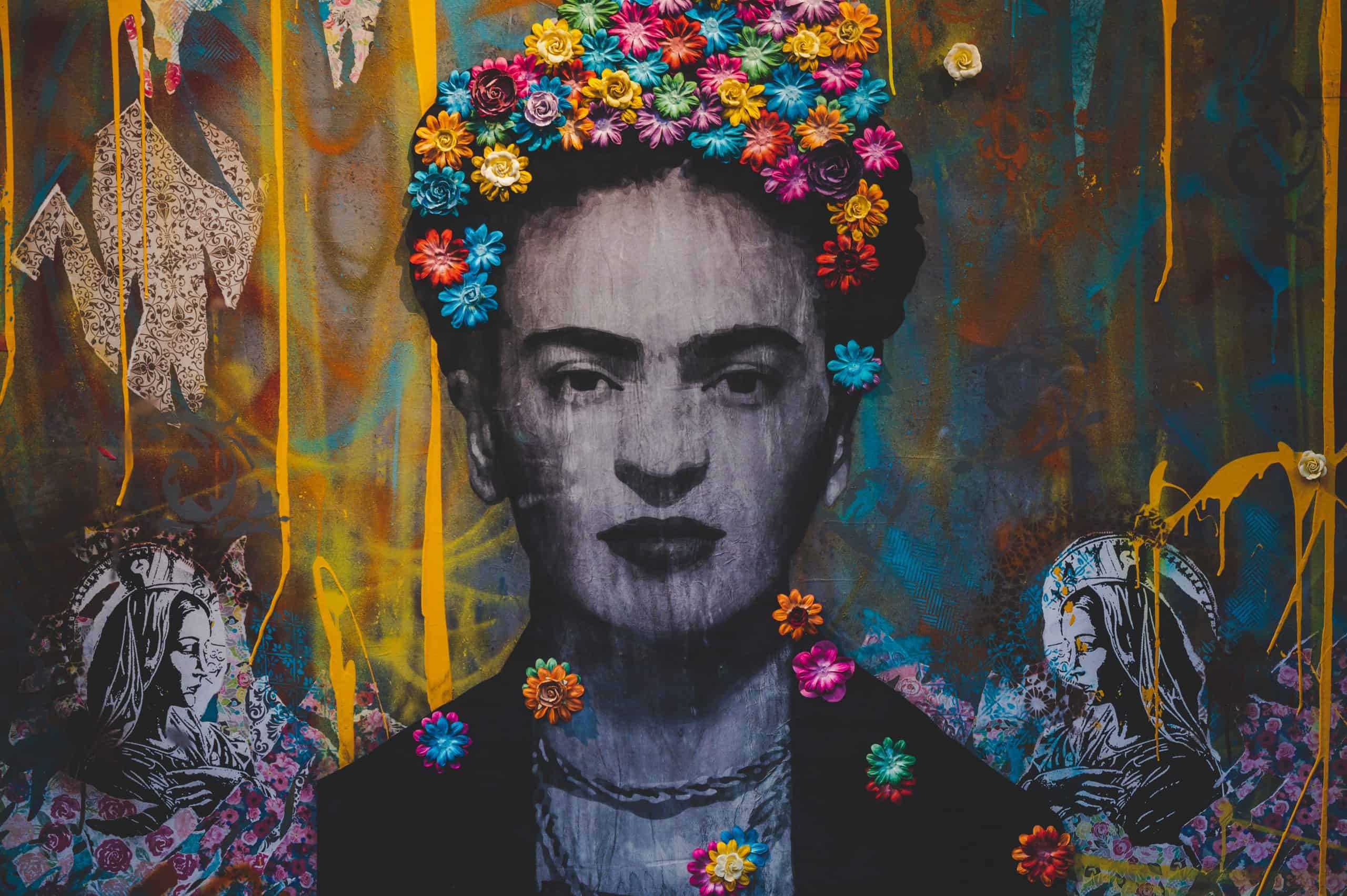 When you mention famous Mexican artists to most people, they immediately think of Frida Kahlo. However, on an international scale, unless people specifically have a strong interest in art, few are aware of other beloved Mexican artists.

Art in Mexico has changed and developed in a fascinating way over the past few centuries. Today, Mexico City’s art scene is one of the best in Latin America and arguably, throughout the entirety of the Americas.

No doubt, events in Mexico’s history have shaped and influenced Mexican art culture: colonization, the struggle for independence, political matters, etc. Similarly, Mexico is an extremely diverse and multicultural country.

68 indigenous groups call Mexico home today. Their cultural background, ancient practices, religion, and beliefs influence their work and enable them to create pieces, unlike anything you will find elsewhere.

11 Most Famous Mexican Artists of All Time

Frida Kahlo is without a doubt one of the most famous Mexican artists of all time. Even people who are not familiar with her work know her name or have seen her photograph.

She remains a national icon to this day in Mexico and for good reason. Frida was born in Mexico City in 1907.

However, she would often tell people that her real date of birth was 3 years later in 1910. This was not out of vanity, but so that she would be associated with the Mexican revolution.

Kahlo is of mixed Mexican, Spanish and German descent. She is seen as a feminist icon and her work is often merited with utilizing indigenous influences to highlight the beauty of Mexico’s indigenous cultures.

Frida almost died at age 18 when a trolley collided with the bus that she was traveling on. Following the accident, she had to have more than 30 operations.

During the long, solitary period that she spent recovering, she turned to art. Frida created 143 paintings, 55 of which are self-portraits.

She shared a turbulent romantic life with Mexican artist Diego Rivera whom she married twice. Frida is quoted as saying “I suffered two serious accidents in my life, one in which a streetcar knocked me down. The other accident was Diego”.

In 1939, the Louvre bought Kahlo’s “The Frame”. This was significant at the time because Frida’s painting was the first piece by a 20th-century Mexican artist to be purchased by an internationally renowned museum.

Diego Rivera was born in December 1886. He is widely regarded as one of the best and most famous Mexican artists of all time.

He traveled the world from an early age and during the course of his life, lived in several countries. These included Mexico, Ecuador, Bolivia, the United States, Argentina, France, Italy, and Spain.

Being exposed to different cultures and countries no doubt had a significant impact on Rivera’s art. He didn’t stick to specifically one style of art.

Instead, he dabbled with many. Cubists, Flemish, Impressionists, and Post-Impressionists were just a few that he experimented with. Over the course of his life, he produced more than a whopping 10,000 pieces of art.

Rivera’s personal life is just as interesting to many as his artwork. He was eccentric, eclectic, and renowned for being overweight and grotesquely unattractive.

Despite his physical appearance though, Rivera was known as being a major hit with the ladies. Most notably, he married his fellow artist Frida Kahlo twice.

However, it seems that nobody could tame him and over the course of his life, he is documented as having four wives and over 50 lovers! Rivera was so beloved and his art was so special that he massively overshadowed his partner Kahlo.

For decades she was known as nothing more than “Diego’s wife”. That is until her art started to receive acclaim in the 1970s and 80s.

Many of Rivera’s pieces are strongly patriotic and unapologetically Mexican. They use different styles to portray scenes in Mexico’s history, traditions, and culture. For instance, the Mexican Revolution and the struggles faced by the indigenous people.

There were three great muralist painters in Mexico. Namely, they were David Alfaro Siqueiros, Siego Riviera, and José Clemente Orozco.

Siqueiros was born in 1896 to a wealthy family from Chihuahua. He was just 15 when the Mexican Revolution started – an event that would change the course of his life, and influence his artistic creations forever.

Siquieros merged the art styles of socialist realism, pre-Columbian art, and Cubist forms, much like his predecessor Diego Riviera. He joined the Syndicate of Revolutionary Mexican Painters, Sculptors, and Engravers in support of the revolution.

Much of his work was politically charged and left-wing. This was something that led to several clashes between him, members of the public, and his own family who often did not support his views.

During the 1920s and 1930s, Siquieros was repeatedly jailed for his work. He eventually relocated to the United States – first to Los Angeles and then to New York.

Here he used his artwork to tell the story of the relationship between the USA and Latin America. In New York, he opened a school for young artists. Perhaps one of his most notable students was Jackson Pollock.

Gerardo Murillo Cornado is recognized as being one of the pioneers of creating patriotic, nationalist artwork in Mexico. He is often referred to by his Aztec name Dr. Atl.

This may sound like the name of a modern-day graffiti artist but Cornado lived during the late 19th and early 20th centuries. His name comes from the Nahuatl word for water (ātl).

He himself was of mixed indigenous and Spanish descent. He adopted this name in support of the indigenous people of Mexico and their culture, and as a rejection of the Spanish colonization of Mexico by his ancestors.

Cornado hails from Guadalajara where he was born in 1875. He studied in Europe under a scholarship from the government before returning to Mexico during the revolution.

His love and appreciation of indigenous cultures is evident in much of his artwork. He created many stunning landscape paintings that focused on the natural beauty of Mexico.

Leonora Carrington was a British-born Mexican female artist. After being born in the little village of Clayton-le-Woods in Lancashire, England, she spent most of her life in Mexico.

Her family in the UK was very much religious and upper-class. They placed expectations on her that she felt suffocated by and instead found refuge in art. After studying at a new art academy founded by painter Amédée Ozenfant in London in 1936, she moved to Spain and then Mexico.

Her life was filled with adventures and traumas. She was institutionalized in Spain and married a Mexican Diplomat so that she could leave Europe and fly to the Americas.

In Mexico City, she met and married Hungarian photographer Emeric Weisz. Carrington
was one of the last surviving participants in the surrealist movement of the 1930s.

She passed away in Mexico City in 2011. Carrington was arguably the most famous female surrealist painter, with surrealism being a style that was dominated by male artists at that time.

Women surrealists were often the subject of ridicule and were not taken seriously. However, Carrington persevered and succeeded against the odds.

José Clemente Orozco was the third of Mexico’s greatest muralists. He is widely regarded as being the most important 20th-century muralist to work in fresco.

Born in 1883, he developed an interest in the art world as a young boy living in Mexico City. He visited the workshop of José Guadalupe Posada, Mexico’s first great printmaker as a seven-year-old boy.

Posadas caricatures and obscure black and white drawings depicted dark news stories and events. Orozco credits Posada for being a major source of influence for him as an artist.

This is evident in many of the dark themes that Orozco uses in his creations. His work differs from that of his peers Siqueiros and Rivera in that he was critical of the Mexican Revolution. A major focus of his work was to express the struggles of the lower classes.

When studying at the  Academy of San Carlos in 1905, one of Orozco’s teachers was Gerardo Murillo Cornado. He lost his hand in a laboratory accident but it never deterred him from painting only with his right hand.

Orozco gained recognition and acclaim for his murals not just in Mexico, but around the world. He rejected European styles of painting and instead focused on indigenous art styles.

María Izquierdo was a Mexican female painter. She was born María Cenobia Izquierdo Gutiérrez in San Juan de Lagos in the northern state of Jalisco in 1902.

Despite not being so well known as the likes of Kahlo or Carrington, Izquierdo’s work carried important feminist messages. She was the first Mexican woman to have her artwork displayed in museums in the United States.

She began to study painting at the National Fine Arts School in Mexico in 1927. No other than Diego Riviera himself recognized her for her excellent painting skills and talent.

In 1930, she had a solo exhibition at the Art Center in New York. The exhibition was funded by Frances Flynn Paine and contained 14 oil paintings.

She used her paintings as a form of activism. They expressed the struggles facing modern Mexican women living under traditional patriarchy.

Mexico is largely patriarchal, even today. So considering the fact that Izquierdo used her work as a platform for feminist rights in the 1930s and 1940s, she was way ahead of her time.

Born in Aguascalientes in 1852, Jose Guadalupe Posada was a Mexican satirical cartoonist and pictorial Journalist. At that time, a lot of people were illiterate.

So, Posada created grotesque caricatures, often of skeletons, to convey recent events to the people. Throughout the course of his lifetime, Posada produced thousands and thousands of illustrations and caricatures.

His work would go on to inspire countless cartoonists across Latin America. They would adapt and personalize his style to create dark, humorous, and satirical illustrations that would be used in newspapers and magazines.

Posada studied illustration at the Municipal Academy of Drawing in Aguascalientes in the 1960s. Undoubtedly his most important contribution to the world of Mexican art and culture is La Catrina.

A version of this was first drawn by Posada around 1910. La Catrina is the female skeleton depiction that is often associated with the Day of the Dead.

When you head to Dia de Los Muertos celebrations anywhere from San Cristobal de Las Casas to Oaxaca, you will see Catrina sculptures, floats, and women donning Catrina makeup. Despite now being considered as being one of the most famous Mexican artists of all time, Posada never became wealthy.

He lived a simple life and had a severe drinking problem. He died of gastroenteritis in 1913.

Sadly, he was largely forgotten towards the end of his life. He died in poverty and was buried in an unmarked grave.

Were you aware of these Mexican artists? Which ones are your favorites?